Tweeds and tartans are both wonderful wool fabrics for the cooler months, and tweed especially was immensely popular for sportswear in the early 20th century. Sporting togs are especially tempting for outings like tweed rides, fall picnics, and golf gatherings, but what exactly makes a garment tartan or tweed? And which is the right choice for a sporty 20s/30s ensemble?

Let’s start with the basics. A tartan is a woven geometric pattern with two colors as its base (one horizontal and one vertical), which overlap to form checks. Many tartans use more than just two colors, creating a variety of checks within the fabric. The key trait of tartans is that the pattern is always regular. While all tartans are plaids, not all plaids are tartans—and this geometric regularity is an important factor in recognizing the difference. 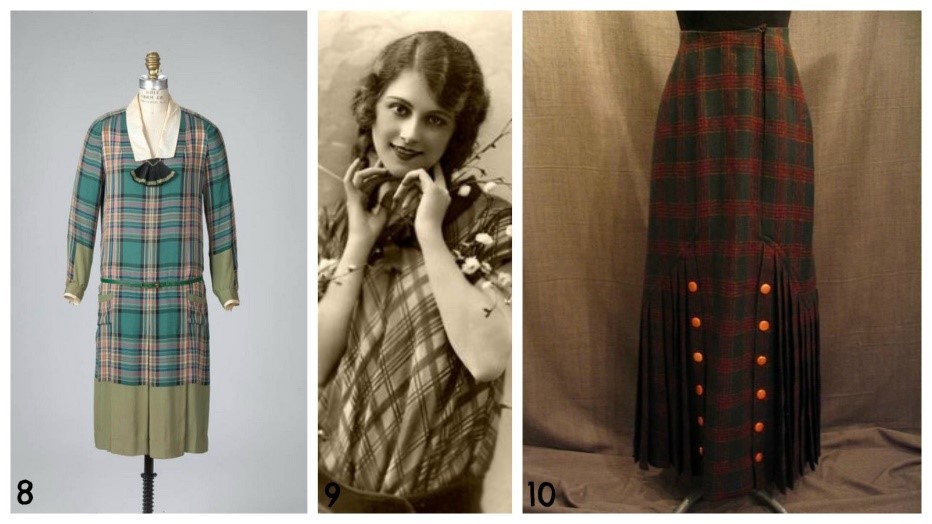 In the Scottish Highlands, the term “plaid” originally referred to a large piece of woven fabric (like a blanket) that could be worn in several ways by men and women–its most famous use, as a “belted plaid,” evolved into what we now know as a kilt. Plaids were usually but not always, well, plaid, and were sometimes striped or solid instead. By contrast, the term “tartan” referred in particular to woolen cloth woven in colored cross-directional stripes by 1600. At some point between the adoption of the plaid (pictorial evidence shows them as common garments by the 14th century) and the 19th century, the use of the term to mean the pattern instead of the garment itself developed—and then tartan the pattern took off in the U.S., thanks in large part to Queen Victoria. Until the mid-19th century, some tartans had names, some were associated with specific regions or clans, and others were just numbered when entered into sample books. But the tartan frenzy in the mid-1800s brought with it the idea of named “clan” tartans, leading to the system we know today: specific patterns (called setts) are registered with the Scottish Register of Tartans, the governmental body responsible for the registration, promotion, and preservation of tartans as a historically and culturally significant part of Scottish heritage.

Tweed has an open weave, usually with a “tweel” (or “twill”), a diagonal line running through the fabric that increases the weave’s strength making the cloth warmer and more stable. While this weave gives tweed its traditional “v” shape, tweed can also include a variety of patterns (even plaid!).

Like tartan, tweed was the durable cloth of farmers until the 19th century, when it was “discovered” by the landed gentry and its popularity exploded, increasing interest in and sales of Harris Tweed for sporting clothes. The end of the 19th century also saw a rise in women’s participation in sports–golf, bicycling, hiking–which meant more sportswear! Tweed skyrocketed, becoming an integral part of a wealthy, fashionable wardrobe for both genders. It was in such high demand that by 1903 production had spread from Harris to other islands in the Outer Hebrides. By 1906, Harris Tweed had become so popular and weaving technology had developed enough that the Harris Tweed weavers were concerned that low quality copies would emerge. To prevent this members of the Harris Tweed industry met in Stornoway, where tweed standards and an inspection system were developed to certify true Harris Tweed (the stamp went into full effect in 1911). If you buy stamped, official Harris Tweed today, it still meets those standards.

So what exactly is the difference between tartan and tweed? It’s all in the weave. Tartan is a pattern–plaid, in particular–that is woven, while Harris Tweed is a particular weave–including the diagonal “twill”—that could include a pattern. This means that you could weave a tweed with a tartan pattern, but there are many tweeds which aren’t tartans, and many tartans that aren’t tweeds. Goodness!

All this to say that extant garments, advertisements, and fashion plates from the early 20th century demonstrate the popularity of patterned wool for sportswear—especially tweed. A great equalizer, the weave shows up in men’s and women’s togs throughout the next few decades; but tartan doesn’t resurge until almost the 1950s. So if you’ve got an eye out for fashionable frocks from the 20s-30s, aim for tweed—plaid, plain, or anything in between!

Some photos courtesy of A Hume Country Clothing, http://www.ahume.co.uk/Tweed-Jackets/c-1-226/